Greek carrier Aegean reported improved results for 2014 on Thursday, driven by network expansion and synergies with Olympic Air, while reporting a 14 percent rise in passenger traffic to 10.1 million passengers, the highest ever achieved by a Greek airline. 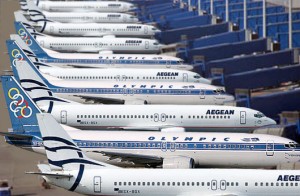 The group, which recently announced its decision to take delivery of seven brand new A320 aircraft in 2015-2016, generated operating cash flow of 112 million euros, resulting to cash & short term investments of 218 million euros at year end, despite significant pre-delivery payments in relation to the new Airbus order.

Traffic in the domestic network increased by 15 percent driven by increased demand due to lower fares and strong connecting traffic. International traffic rose by 13 percent, boosted by performance in Athens, where traffic rose by 20 percent on the back of Aegean’s network expansion, which supported the city’s strong tourism recovery. The Greek carrier currently serves 134 destinations in 42 countries.

“In 2014, we reached another milestone and achieved passenger traffic in excess of 10 million passengers, offering the biggest network ever operated by a Greek airline,” Aegean managing director Dimitris Gerogiannis said.

Mr Gerogiannis added that for 2015, the group plans to expand out of Athens as well as Larnaca in Cyprus with the addition of new destinations and more frequencies on existing routes.

“Even in this uncertain environment, Greek tourism, and especially arrivals to Athens, seem resilient… we maintain a long term view, targeting at improving the country’s and Athens’ connections, securing our competitive advantage of our main hub and also upgrading Greek travel and tourism product,” Mr Gerogiannis added.

Founded in 1987, with a fleet of 50 aircraft, Αegean Airlines has been a Star Alliance member since 2010. The country’s largest carrier was awarded the Skytrax World Airline prize as the best European regional airline in 2014.