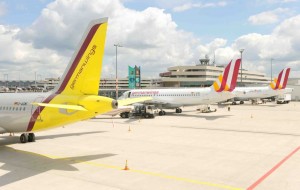 The co-pilot of the ill-fated Germanwings flight that crashed in the French Alps, killing 150 passengers and crew on Tuesday, intentionally sent the plane crashing, a Marseille prosecutor told a press conference in Paris on Thursday.

According to Brice Robin, the prosecutor leading the criminal investigation into the crash, the co-pilot of the Germanwings flight appears to have crashed the plane deliberately, Reuters reports.

The co-pilot, a German citizen named Andreas Lubitz, 28, was left in control of the Airbus A320 after the captain left the cockpit and refused to re-open the door, “pressing a button that sent the jet into its fatal descent”.

Earlier reports by the New York Times had indicated that one of the plane’s pilots may have been locked out of the flight deck. Germanwings and parent company Lufthansa had until the time of the press conference not confirmed the claim nor the names of the pilots.

“We have not yet been able to study and to establish an exact timing for all the sounds and words heard on this file,” BEA air incident investigation bureau director Remi Jouty was reported by France 24 as telling a news conference in Paris, earlier today. Adding that it was “a matter of days” before the first findings were released.

Meanwhile, as search teams continue to look for victims’ remains in the French Alps.

En route to Dusseldorf, Germany, from Barcelona, Spain, budget carrier Germanwings Flight 4U 9525 nosedived into the French Alps. There was no “Mayday” call.

Protocols and standard safety procedures on board air carriers were tightened after the 9/11 attacks in New York.