Thessaloniki Hoteliers Reach Out to German Market at ITB 2015 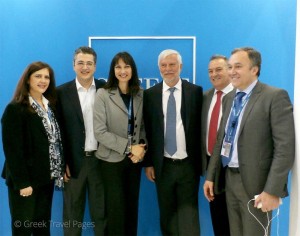 History, entertainment, gastronomy and culture are at the center of the Thessaloniki Hotels Association (THA) ongoing promotional campaign, which it had the chance to present at this year’s ITB 2015 in Berlin earlier this month.

Besides promoting the northern port city of Thessaloniki as a leading city break destination with a wide variety of offerings, the THA also aims to attract German holidaymakers to the surrounding regions, including the Halkidiki peninsula, Pieria and Imathia.

In this direction, THA members met with travel journalists, social media experts, tour operators and tourism intelligence authorities during the ITB’s Speed Networking event, and participated in a series of B2B meetings in order to further business interests.

“Last year (2014) was very important for Thessaloniki, as it recorded an increase in overnight stays. We want this increase to continue in 2015, but also for it to be accompanied by the respective financial figures which will benefit the local economy,” THA president Aristotelis Thomopoulos said.

In the meantime, the northern port city comes second after Athens as a choice city break destination for German tourists visiting Greece, GM Marketing Greece Iosif Parsalis said, when speaking about the “Thessaloniki: A Big Heart!-The City that Loves to Live” campaign, a joint initiative of the Central Macedonia Region, the municipality and the THA.

Free Admission at the Acropolis Museum on March 25