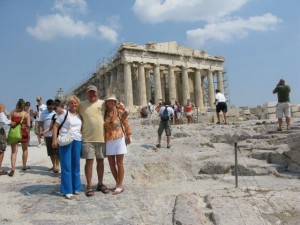 American tourists at the Acropolis in Athens. Photo: GTP

Greece is among the Top 5 Dream Destinations for US travellers, according to TripAdvisor’s TripBarometer Study released on Wednesday.

The world’s largest accommodation and traveller survey, which examines global travel trends, year-over-year changes in consumer spending and hotelier confidence, is based on data from over 44,000 respondents.

According to the findings, approximately 67 percent of US travelers plan to take an international leisure trip in 2015, as compared to 50 percent who reported taking one in 2014.

US holidaymakers listed five places they would visit if money were no object. Greece ranked fifth as a “Dream Destination” after Italy (first), Australia, New Zealand and Ireland.

“The TripBarometer report paints a positive picture for travel this year, with travellers twice as likely to increase their vacation budgets than cut their spending,” said Barbara Messing, chief marketing officer, TripAdvisor.

“Across the board, people want to take more international trips and Australia, Italy and the US continue to be the destinations topping travellers’ wish lists.”

In the meantime, Greece ranked 8th in the hotelier confidence index in terms of optimism about profitability, room rates and investment priorities.

US travel budgets are expected to average 8,700 dollars in 2015, the same as last year.

The online survey was conducted between January 16 and February 2, 2015.

More Greeks are Taking Cruises, Domestic Demand Up 10% in 2014