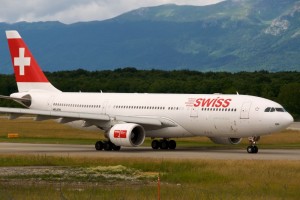 Operating profit amounted to CHF 347 million, up 31 percent percent year-on-year, though the improvement is attributable primarily to changes in depreciation policy within the Lufthansa Group.

The airline transported 16.17 million passengers in 2014, a 1.3 percent increase on the 15.97 million of the previous year and another passenger record.

SWISS will be adding numerous new destinations to its network at the end of March, and this summer will see the introduction of a new fare concept for its European routes that is better aligned to today’s customer needs.

According to the announcement, the declines in the values of the euro, the US dollar and other currencies against the Swiss franc will impact negatively on SWISS’s earnings results, since a large part of the carrier’s revenues are generated in foreign currencies.

SWISS points out that the net impact of a strong Swiss franc and low fuel prices on this year’s earnings is currently unclear.

“But, given the increasingly tough business and operating environment that it is likely to face, SWISS expects to post an operating result for 2015 that is broadly in line with the previous year,” the announcement read.