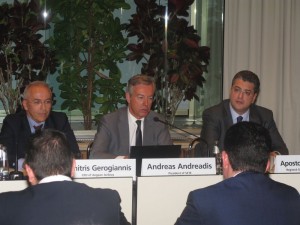 Expecting another record year of tourism arrivals, the Greek Tourism Confederation (SETE) brought a message of confidence and collaboration to Germany on Tuesday, the eve of ITB Berlin 2015, the leading trade fair for the worldwide travel industry.

With a record 25 million people expected to visit Greece in 2015, bringing an anticipated 14 billion euros to the Greek economy, the role of tourism in driving forward the Greek economy was underlined during a press conference for the German media by SETE and Marketing Greece at the International Congress Center of ITB Berlin.

Early bookings and the increase in scheduled flights to Greece indicate that the 24.5 million visitors that Greece welcomed in 2014 –- including 2.5 million cruise ships arrivals –- will be surpassed this year, according to SETE.

“2014 was undoubtedly a golden year for Greek tourism, with a 23 percent increase in tourism arrivals from 2013 and Greece re-entering the top 15 tourism destinations of the world,” said Andreas Andreadis, president of SETE.

“With a 13.5 billion euros direct boost to the real economy and with over 35 billion euros total effect, cities, islands, communities of all sizes and the small and medium-sized businesses that make up the backbone of the Greek economy have been revitalised through tourism. The result has been the creation of more than 100,000 jobs.”

According to market research institute GfK, year-to-date bookings for 2015 to Greece from Germany, by end of January 2015, were up by 12.8 percent compared to the same period last year, with the average booking 1 percent cheaper compared to 2014. 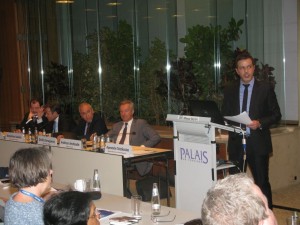 On his part, Iossif Parsalis, general manager of Marketing Greece, noted that the attraction of Greece as a sun and sea destination is clearly as strong as ever, but that the country’s “renowned hospitality” and the “longstanding bond between Greeks and Germans” have proved crucial to maintaining momentum in Greece’s most significant tourism market.

“Greece has such a strong tourism product that bookings have been unaffected by political developments and has reinforced the close friendship between Greece and Germany,” he said.

Playing a unifying role in the burgeoning spirit of collaboration among Greek tourism organizations, present at the press conference were representatives from Eurobank, Enterprise Greece and Aegean Airlines –- leading voices in private sector investment, privatisation and transport –- to deliver a message of confidence and productivity to the German market.

ITB 2015: Greece Tourism Investment On the Up