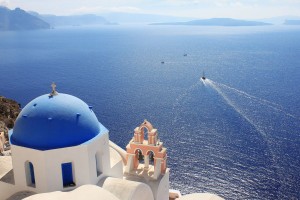 German travellers are expressing interest in Greek packages ahead of the summer season, Deutshe Welle reports ahead of the international tourism ITB 2015 show, which kicks off in Berlin on Wednesday.

“We see a large number of bookings for the summer season and Greece is among our clients’ five most popular choice destinations,” said travel company Thomas Cook.

Even if Greece were to leave the eurozone, major tour operators say this would not affect tourists. “Agreements with hotel owners and partners have been finalized in euros,” says Thomas Cook.

According to the report, German tourists have remained unaffected by the recent political developments in Greece, following elections in January, which brought the Syriza government to power.

“There are no indications that the Germans are less willing to travel to Greece because of the new political situation there,” Norbert Fimpigk, president of the German Travel Association (DRV), told Ruhr Nachrichten.

Mr Fimpigk added that figures “have returned to pre-crisis levels, after a drop of over 30 percent recorded in recent years”.

According to Greek Tourism Confederation (SETE) figures, however, bookings by German travellers are “not satisfactory” and have come to halt in the last few weeks.

In the meantime, a German travel expert said Greece should upgrade its tourist product by attracting private investors and improving its package deals while expanding into conference tourism and relaxation and spa tourism, which Spain and Turkey have already tapped into.

Greek Alternate Tourism Minister Elena Kountoura will be in Berlin this week for the ITB 2015, where she will meet with German sector professionals.