The European Regions Airline Association (ERA) is celebrating its 35th year of service to members. Originally founded in 1985 in Switzerland by a small group of airline entrepreneurs, ERA’s membership and focus has evolved considerably over the last 35 years in line with industry changes.

Today, ERA represents the interests of 53 airlines and over 123 companies involved in European air transport, including airframe and engine manufacturers, airports, suppliers and service providers. In addition to its policy and technical work, ERA provides an invaluable forum for members to come together, network and learn from each other. 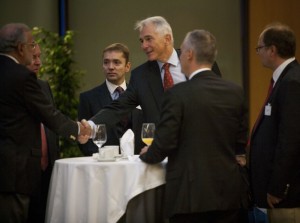 ERA has seen significant changes in the European regional aviation market and its membership base over the years. As well as representing the traditional regional niche, point-to-point operators, ERA now speaks for a growing number of ACMI (aircraft, crew, maintenance, insurance) carriers in the passenger and freight market, smaller network carriers as well as the subsidiaries of major airlines who provide feeds to Europe’s hubs.

“ERA member airlines have shown throughout the years that they are highly adaptable and resourceful and can respond to the vagaries of what is an ever-changing market,” says Simon McNamara, director general of ERA.

“ERA has supported its members through challenging times, working with them and on behalf of them to search out new business opportunities and ensure that their interests are represented at the very highest levels in Europe.”