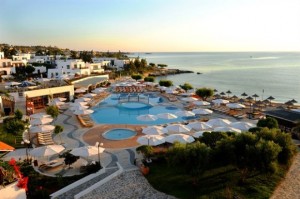 The Greek Tourism Confederation (SETE) has outlined the importance of maintaining the current value added tax (VAT) rate on the Greek hotel industry, in a letter sent today to Finance Minister Yanis Varoufakis.

In the letter, signed by SETE President Andreas Andreadis, the association stressed that its recent positive forecast for the coming season — 25 million international arrivals and over 14 billion euros in revenue — may be overturned if the VAT rate for hotel accommodation rises from the current reduced rate of 6.5 percent to 13 percent.

SETE drew attention to the fact that already some 50 percent of 2015 holidays in Greece have been sold at prices based on the existing VAT rate. “If the VAT rate is to increase then the demand for Greek travel packages will decrease rapidly, pushing the flow of millions of tourists to the country’s competitors that have lower VAT rates,” the association noted.

Referring to a recent study conducted by Ernst & Young, SETE pointed out that the overall increase in state revenue from a VAT hike on hotels would amount to some 200 million euros this year and in five years time drop to up to 70 million euros per year.

According to the study, the Greek tourism sector should expect to count losses of 415 million to 680 million euros during the first year of the VAT hike from 6.5 percent to 13 percent. In the long term, the losses for tourism are estimated to reach 1.7 billion euros per year. Meanwhile, the total impact on GDP is said to amount to losses of up to three billion euros (or -1.4 percent).

Instead of doubling the VAT rate of hotels, SETE suggested for the government to fight tax evasion by boosting systematic checks and launching a series of measures such as connecting shops’ cash registers online with the finance ministry and introducing electronic invoicing.

To read the letter that SETE sent to Finance Minister Yanis Varoufakis (in Greek), press here.