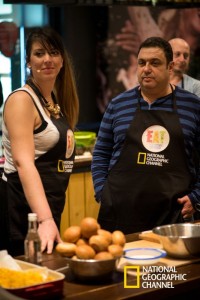 Chefs, food bloggers, journalists, entrepreneurs, F&B professionals and foodies of all sorts gathered to learn more about the secrets of Thessaloniki cuisine.

Donning his apron and toque, featured chef Christophoros Peskias joined food blogger Madame Ginger (aka Marilou Pantaki) in live cooking sessions, which included six recipes inspired by the six units of Greek food history as these are presented in the episodes of the EAT: The Story of Food show.

Thessaloniki and its goodies were also featured in National Geographic Traveller’s Jan/Feb 2015 issue under the title “Eat: Thessaloniki” focusing on the northern port city’s rich, multicultural past and “passion for food”.

Organized by FOX International Channels Greece, the event, also held in Athens earlier this year, promoted EAT: The Story Of Food, which is aired every Monday at 4pm on the National Geographic Channel, exploring the history of food.