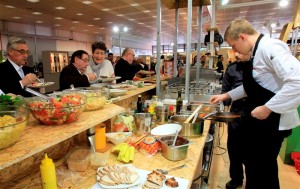 The 9th International Culinary Competition of Southern Europe will bring cooking magic to the northern port city of Thessaloniki, on February 26 to March 1, as part of the Detrop and Oenos trade shows.

Organized by the North Greece Chef’s Association and TIF Helexpo, some 450 contestants from 27 countries, among them Thailand, Taiwan, Spain, Malta, Sweden and Serbia, will serve 25 international judges some of their most inventive creations vying for awards in a number of categories including Chef of the Year, School of the Year and the coveted Grand Prix Team of the Year.

Contestants for the Grand Prix Team award will be given a black box full of unknown products and will be required to do their culinary magic on the spot.

An innovation this year, includes a photo shoot contest where three teams from South Korea, Cyprus and Montenegro will compete with creative dishes, which will be photographed.