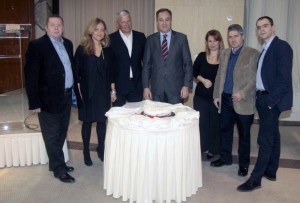 The Board of Directors of the Thessaloniki Hotels Association during the customary cutting of the Vasilopita (Greek New Year’s Cake).

The increase of leisure tourists, the significant rise in overnight stays and the low revenue per available rooms, summarizes Thessaloniki’s tourism performance in 2014, according to the Thessaloniki Hotels Association.

During the customary cutting of the Vasilopita (Greek New Year’s Cake) at an event held at the Nikopolis Thessaloniki hotel, the association’s president, Aristotelis Thomopoulos gave a review of the performance of the city’s hotels last year and set goals for 2015.

According to Mr. Thomopoulos, the good news is that in 2014 Thessaloniki’s hotels recorded an actual increase in overnights made by Greek and foreign tourists after five years of decline. However, he raised concern about political developments in Greece and referred to the drop in business tourism arrivals to the Greek Northern city. He also added that Thessaloniki saw an increase in leisure tourists last year.

Mr. Thomopoulos underlined that the association will continue to launch actions to attract more high-spending tourists such as taking part in international tourism fairs and boosting relations with bodies such as the Greek National Tourism Organization, Marketing Greece and Aegean Airlines.

“Giving Thessaloniki a stronger promotion abroad is among our aims for 2015,” he said.