SETE Lauds FinMin’s Pledge for No VAT Hikes in Tourism 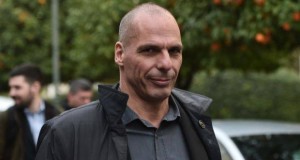 SETE president Andreas Andreadis expressed his satisfaction with Finance Minister Yanis Varoufakis’ latest attitude during talks between Greece and eurozone finance ministers on Monday, against the increase of VAT (value-added-tax) rates that apply on the Greek islands.

Greece turned down a proposed six-month extension of its 240 billion euro bailout program during a Eurogroup meeting on Monday.

Mr. Varoufakis has been in ongoing negotiations since the leftist Syriza government came to power on January 25, in efforts to keep its pre-election pledge to end austerity measures and demand changes to the bailout program, which expires at the end of the month.

Mr. Andreadis, head of the Greek Tourism Confederation (SETE), representing many of the country’s tourism associations and some 500 independent tour operators, said via his twitter account that Varoufakis’ stance was “especially positive at the Eurogroup concerning no VAT hikes in tourism, a sector of which everyone has high expectations”.

UNWTO: Governments Around the World Recognize Benefits of Visa Facilitation