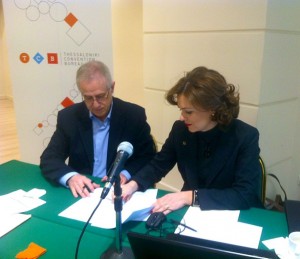 The Thessaloniki Convention Bureau (TCB) and the Macedonia-Thrace Travel Agents Association (MTTAA) have joined forces to promote the northern port city of Thessaloniki as a prime MICE destination.

The two sector bodies organized a joint event on February 11 at the Mediterranean Palace, where the TCB presented its strategy and actions to MTTAA members.

MTTAA president Vyron Theologis underlined the importance of such initiatives and stressed that through the TBA-MTTAA collaboration a new era is launched for the promotion of Thessaloniki as a primary MICE destination, which will benefit the region and its residents.

Despina Amarantidou, president of TCB, said cooperation and teamwork were prerequisites for the successful promotion of the city and called on all parties involved to unite towards a common goal.

The TCB is currently in the process of securing the rights for the city to host the international three-day “World of Coffee” meet – organized by the Speciality Coffee Association of Europe (SCAE) – for the years 2017, 2018 and 2019. The June event is expected to attract over to 200 exhibitors and some 10,000 visitors from 100 countries.

Signature Travel Invites All to Masque Latin Party in Athens