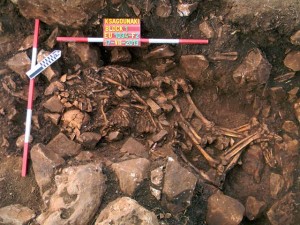 One of the world’s oldest hugs came to light during excavations near the Diros Caves south of Areopolis in the Peloponnese last week where the skeletons of a man and a woman in an embrace were found in tact. The hugging couple is said to date back to 3800 BC.

“It is possibly the oldest grave to have ever been found,” Giorgos Papathanassopoulos, head of excavation work near Alepotrypa Cave, told Greek daily Kathimerini.

Uncovered last year and following DNA and carbon testing, the finds reveal that the bones belonged to a man and a woman aged between 20 and 25. Additional analysis will continue in order to identify the reason of death.

Nearby, works on a second grave have also revealed a second couple in “contracted position, in connection with broken arrow heads”.

Archaeologists said that double burials in embracing positions are rare and unique in Europe.

Famous for its subterranean caves, which are part of an underground river, works at the Diros Caves have been carried out since the ’70s.

SETE Lauds FinMin’s Pledge for No VAT Hikes in Tourism