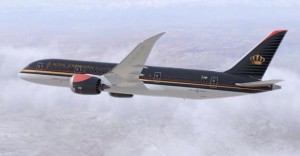 Royal Jordanian, the national carrier of Jordan, has announced the addition of one weekly direct flight from Athens to Amman in the summer schedule 2015, reaching five weekly flights.

The extra flight on the Athens-Amman route will run every Saturday during the summer schedule from March 29 until October 24.

Also Royal Jordanian’s passengers will be able to manage all their travel plans on the move in a simpler and more convenient way with a newly introduced RJ mobile application offering features from flight booking to flight status and more.

Royal Jordanian has concluded the introduction of the first group of the 787 order, having welcomed its fifth Boeing 787 Dreamliner at the end of 2014. The Boeing 787 is currently the most technologically advanced and efficient airplane in the aviation industry.