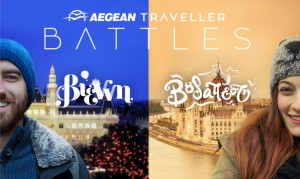 As part of its iTraveller program, Aegean invites you to become the next Aegean Traveller through its Αegean Traveller Auditions, by presenting your escapades on camera.

Every month, two bold travellers will get the chance to visit two new cities on Aegean’s roster and with the help of a camera discover the secret side of their destination.

Hania-based 25-year old Kimonas and 19-year-old Marilivia from Athens are the first Aegean Travellers who will tour the streets of Vienna and Budapest and compete with their video encounters via social media. The winner will be selected on www.facebook.com/aegeanairlines

Aegean, Greece’s largest carrier, is calling on all interested parties to take part in the online audition by uploading a three-minute video featuring a mini-travelogue on www.aegean-traveller.com