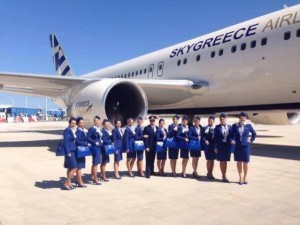 SkyGreece Airlines has added more members to its growing team in Canada as it prepares to unveil its new Canadian flight program.

According to paxnews.com, Eleni Kessaris will serve as Director of the Ontario office and Commercial Manager for Ontario and Western Canada. Kessaris worked for 25 years at Olympic Airlines between 1984 and 2009.

Louise Cofsky has also joined SkyGreece as Director – Call Center and Cruise Development. Cofsky worked at Transat Holidays between 2000 and 2013. Through her career, Cofsky worked at Wardair, was the owner of a travel agency, served as supervisor of a call center and President of Premium Tours.

SkyGreece has also appointed Denis Codere to the role of Deputy Chief Commercial Officer. Codere joined SkyGreece in February 2014 as vice-president sales and commercialization. Before joining SkyGreece, he worked for 13 years with the Transat Group and was vice-president sales, commercialization and development – Europe between 2009 and 2013. He also worked at Air Canada Vacations between 1990 and 2000 in finance, marketing, sales and revenue management.

Founded in September 2012 by Peter Chilakos, Nicholas Alexandris and Bill Alefantis – all of whom are Canadians of Greek origin – the airline also plans to offer flights between Athens and New York.