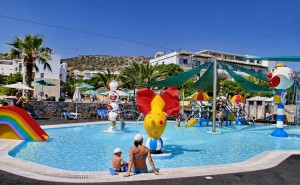 The newly-elected leftist government Syriza said on Thursday, that it has no intention to do away with the all-inclusive resort model but instead focus on making it beneficial for local markets and communities.

“There will be no action against all-inclusive tourism products. To the contrary, the further improvement in terms of quality will ensure the far-reaching benefits of this tourism model for local markets and societies,” newly-appointed Alternate Tourism Minister Elena Kountoura said on Thursday.

The incoming government’s pre-election announcements that it wishes to move away from the all-inclusive resort model towards the traditional holiday scheme so as not to “alienate tourism from the local economy” had raised concerns in the industry.

Syriza has said that it will reexamine contracts with large resort chains as well as running privatization deals, which may also include deals to sell public land to resort developers and a plan to privatize 14 local airports serving Greek cities and islands.

The tourism industry mouthpiece, the Greek Tourism Confederation (SETE), has already proposed the creation of a model that will see all-inclusive resorts working together with local businesses.

The move came after complaints from sector professionals that all-inclusive deals were in effect depriving local businesses of potential customers and income.

SETE president Andreas Andreadis is optimistic and adds that Greece will build on the “momentum of successive growth years in tourism and an exceptionally high quality and value of tourism product”.

“Why not explore a new model of all inclusive hotels that supports the wider community by tying neighboring restaurants and cafes into the holiday experience? Sourcing products locally and working alongside companies that offer experiences and services in the surrounding areas,” Andreadis said.

A driving force of the Greek economy, the sector made a comeback in 2014 recording a record 22 million arrivals.