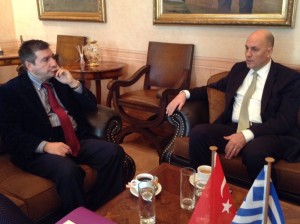 The tourism cooperation between Athens and Turkey was one of the main topics discussed in a meeting today at City Hall between the Greek capital’s mayor Giorgos Kaminis and the Turkish Ambassador to Athens Kerim Uras.

During the meeting, Mr. Uras expressed an interest for the city of Athens as an independent tourism destination.

The possibility of launching a tourism partnership to boost travel between Athens and the Turkish cities of Ankara and Istanbul was also discussed.

Some one million Turkish tourists were estimated to have visited Greece last year.

According to reports, the increase in visitors from Turkey to Greece in 2014 represented an almost 50 percent increase from the number of visits made by Turks to the country in 2011.

In December, the president of the Greek Tourism Confederation (SETE) Andreas Andreadis estimated that in five years, tourist arrivals from Turkey to Greece would reach three million. He came to this conclusion following a meeting with Turkish businessmen who accompanied the Prime Minister of Turkey Ahmet Davutoglu on a trip to Athens.