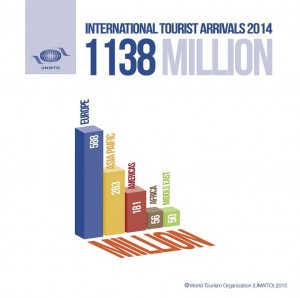 “With an increase of 4.7 percent (51 million more overnights than in 2013), this is the fifth consecutive year of above average growth since the 2009 economic crisis,” the UNWTO said in an announcement.

By region, the Americas (+7 percent) and Asia and the Pacific (+5 percent) registered the strongest growth, while Europe (+4 percent), the Middle East (+4 percent) and Africa (+2 percent) grew at a slightly more modest pace. By subregion, North America (+8 percent) saw the best results, followed by North-East Asia, South Asia, Southern and Mediterranean Europe, Northern Europe and the Caribbean, all increasing by 7 percent. 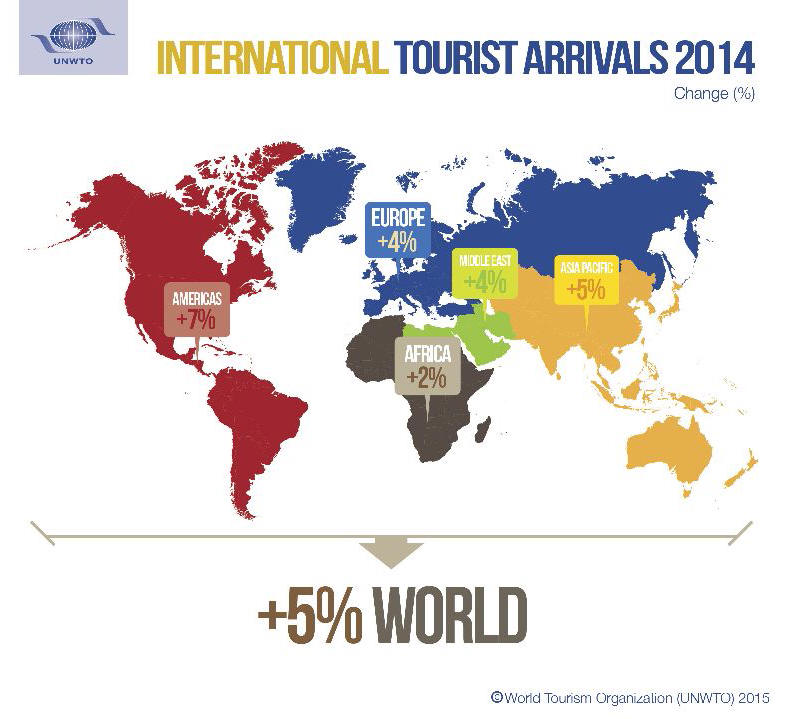 Europe consolidates position as most visited region in the world

Europe (+4 percent), the most visited region with over half of the world’s international tourists, saw an increase of 22 million arrivals in 2014, reaching a total of 588 million. Thanks to these results, tourism has been a major contributor to the European economic recovery. Northern Europe and Southern and Mediterranean Europe led growth (both +7 percent), while results were more modest in Western Europe (+2 percent). Arrivals in Central and Eastern Europe (0 percent) stagnated after three years of strong growth.

For 2015, UNWTO forecasts international tourism to grow by 3 to 4 percent, further contributing to the global economic recovery.

A pickup in expenditure on international tourism from traditional source markets compensated for the slowdown of the large emerging markets, which had been driving tourism growth in previous years.

The total number of trips abroad from China is estimated to have increased by 11 million to 109 million in 2014. Among the other two main emerging markets, the Russian Federation (-6 percent) clearly lost strength in 2014, while Brazil still grew by 2 percent, despite the appreciation of the US dollar against the Brazilian real and slower economic growth.

Dollar-Euro Exchange Rate Key to More Tourists from US