Carnival Cruise Lines Includes Greece in its Return to Europe 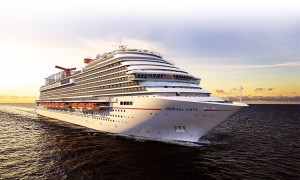 Carnival Cruise Lines is making a comeback to Europe with its most innovative ship ever, Carnival Vista, debuting in spring 2016.

The new vessel will debut May 1, 2016, with a 13-day cruise departing from Trieste, Italy — the first European voyage for Carnival in three years. A variety of Mediterranean itineraries will be offered with port calls throughout Italy, France, Spain, Croatia and Turkey, as well as several new destinations for Carnival such as Crete (Heraklion), and Corfu, Greece; Valletta, Malta; Palermo, Sicily; Cagliari, Sardinia; and Gibraltar.

On October 21, 2016, Carnival Vista will embark on a special 13-day transatlantic crossing and arrive in New York November 3, 2016, then operate a series of voyages from the Big Apple.

Designed to connect guests to the ocean with sweeping views and plenty to do both outdoors and in, Carnival Vista aims to take cruising to new heights and introduce an exciting array of groundbreaking new features including: SkyRide, a breakthrough suspended open-air cycling experience; the world’s first IMAX Theatre on a ship; an expanded water park featuring the colorful Kaleid-O-Slide, the line’s first raft-riding water tube slide; Seafood Shack, a delectable New England-inspired eatery; RedFrog Pub, including the line’s first onboard brewery, and other enhanced dining, bar and entertainment options; as well as new scenic and family-friendly accommodation types.

Restrictions for Travellers to US