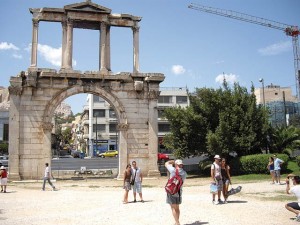 Athens was visited by more than 15 million tourists last year, which represents an increase of more than 20 percent, Greek Tourism Minister Olga Kefalogianni said on Wednesday during her visit to the Athens Chamber of Commerce and Industry (ACCI).

“Our goal is for Athens to become a metropolitan tourism center worldwide and a strong and attractive city break destination,” the tourism minister told ACCI President Konstantinos Michalos.

Mrs. Kefalogianni noted that tourism in Greece has been on an upward trend since 2012.

“However, the political instability and early elections have ‘frozen’ bookings to Greece, while the previous months revealed that 2015 would be a good year for tourism,” she said.

The tourism minister said that she expects an increase in arrivals from the United States due to a stronger dollar exchange rate against the euro and the reduction in fuel prices that affect transport costs.

She also referred to the decline in arrivals from Russia and Ukraine due to the tension in the two countries but stressed that Greece was successfully approaching the market of South America — Brazil in particular — and China.

On his part, the president of ACCI noted that the basic infrastructure of the country — roads, airports, ports and marinas — needs to be upgraded. He added that the country needs to invest more towards developing special and alternative forms of tourism.