In efforts to promote Greek tourism, provide alternative options and enhance the tourist experience, the Hellenic Association of Travel and Tourist Agencies (HATTA) is organizing guided tours for travel operators in Greece, to a number of the country’s cultural spaces, including museums, art galleries and fine arts venues. 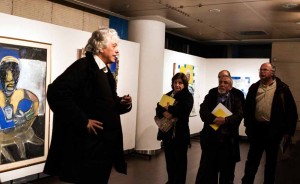 Greek travel agents were also given a tour of Giorgos Kakoulidis’ art exhibition “Visions” by the artist himself. “Visions” will be on display at the Michael Cacoyannis Foundation until January 31. Photo source: HATTA

Aiming to include Greece’s cultural offerings in MICE events, HATTA organized its first trip to the Michael Cacoyannis Foundation last week, where travel agents were informed of the venue’s hosting capacities.

The tour coincided with a joint committee meeting on Incoming and Thematic Tourism in one of the foundation’s halls.

In the meantime, HATTA members also had the chance to attend rehearsals of the Athens Metropolitan Symphony Orchestra.