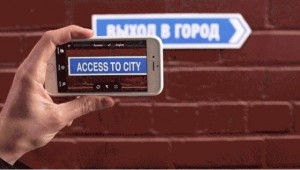 Google recently updated the Translate app on Android and iOS that transforms a traveller’s mobile device into an even more powerful translation tool.

The Translate app already allows the use of camera mode to snap a photo of text and get a translation for it in 36 languages. Now, Google has taken it to the next level and the app instantly translates a text via the camera — “so it’s way easier to navigate street signs in the Italian countryside or decide what to order off a Barcelona menu,” Google says.

While using the Translate app, users just have to point their camera at a sign or text and they will see the translated text overlaid on the screen — even without an Internet or data connection.

This instant translation currently works for translation from English to and from French, German, Italian, Portuguese, Russian and Spanish. Google is working to expand to more languages.

Users can simply tap the mic to start speaking in a selected language, then tap the mic again, and the Google Translate app will automatically recognize which of the two languages are being spoken, letting users have a more fluid conversation.

For the rest of the conversation, the mic does not have to be tapped again — it will be ready as needed.

“Asking for directions to the Rive Gauche, ordering bacalhau in Lisbon, or chatting with your grandmother in her native Spanish just got a lot faster,” says Google.