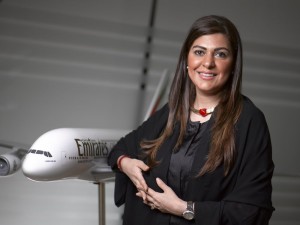 Reema Al Marzooqi has been named new managing director of Emirates for Greece and Albania.

Mrs. Al Marzooqi has been with Emirates since 2003, initially joining Emirates Human Resources department before undertaking the Emirates’ Commercial Manager Outstation Program in 2009.

“The increase in passenger traffic to and from Athens in 2014 reflects the importance of this destination for Emirates,” Mrs. Al Marzooqi said of her new post.

“Emirates has had a continuous presence in Greece over the last 18 years and we aim to maintain our momentum in the domestic market.”

The Dubai-based award-wining airline, which manages the largest fleet of aircraft type Airbus A380 and Boeing 777 worldwide, operates seven weekly flights from Athens to Dubai. A subsidiary of the Emirates Group, it is the largest airline in the Middle East.