Visitors to the Dodecanese island of Rhodes and its residents can now jump on a bike and tour the town thanks to the new bike sharing system launched earlier this month. 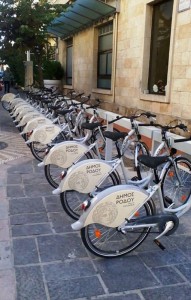 Local authorities aim to make cycling a trend with plans to create bike routes throughout the city offering Rhodes visitors and residents a friendlier environment and upgrading the tourist product.

Bike sharing, first implemented in European cities in 1965, gives people the chance to borrow a bike from one point and return it to another point in the city. An inexpensive means of transportation, public bike sharing systems operate in hundreds of cities worldwide.

The Rhodes bike-sharing scheme is sponsored by the Crete and the Aegean Regional Operational Program 2007-2013, under the guidance of Cyclopolis.

Founded in 2012, Cyclopolis is a Greek company active in the design and implementation of bike sharing systems.