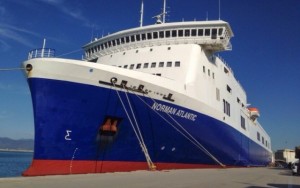 Archive photo of the Norman Atlantic.

Over ten people were confirmed dead in the latest reports of rescue operations late Monday night of the Norman Atlantic, which caught fire off the Ionian island of Corfu on Sunday, when a blaze broke out on the lower car deck.

Italian officials are still unable to confirm the exact number of missing passengers as rescue operations stopped last night, when some 400 people had been safely evacuated from the ship.

There seems to be confusion over the number of missing passengers aboard the Norman Atlantic. In efforts to ascertain the exact number of travellers, managing company ANEK re-examined ticketing lists and found 474 people on board (passengers and crew) instead of 478.

The Italian-flagged Norman Atlantic, chartered by Greek ferry operator ANEK Lines, had been travelling from the Greek port of Patras to Ancona carrying 474 people and 222 vehicles.

Gale-force winds and choppy waters hampered efforts by Greek and Italian rescue crews to airlift passengers from the ship, which remains adrift in the Adriatic Sea between Greece and Italy.

Merchant Marine Minister Miltiadis Varvitsiotis told reporters that airlifts would continue while the vessel is being towed weather permitting.

He added that the ferry had been found to be “seaworthy” when it underwent control checks on December 19.

Mr. Varvitsiotis said that Athens has proposed towing the vessel to Albanian shores.

Italian shipowner Carlo Visentini and Argilio Giacomazzi, the captain of the Norman Atlantic, will face criminal charges, according to the Athens News Agency.

Over 300 Evacuated from ‘Norman Atlantic’ as Rescue Operations Continue