Over 300 Evacuated from ‘Norman Atlantic’ as Rescue Operations Continue 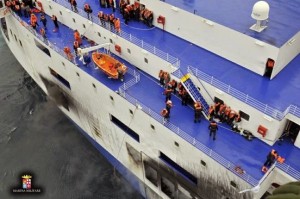 Some 316 passengers have been rescued while hundreds remain stranded aboard the Norman Atlantic ferry as evacuation and rescue efforts continue despite the bad weather conditions.

The passenger ferry which had been carrying 423 passengers, 55 crew and 222 vehicles travelling from the Greek port of Patras to Ancona caught fire off the Ionian island of Corfu on Sunday when a blaze broke out on the lower car deck.

Gale-force winds and choppy waters hindered efforts by rescue teams from Greece and Italy to airlift passengers from the ship, which remains adrift between Greece and Italy.

A Greek passenger is confirmed dead and two others injured.

Merchant Marine Minister Miltiadis Varvitsiotis told SKAI TV that Greek rescue crews have been working under difficult weather conditions since Sunday and that the Italian-flagged Norman Atlantic, chartered by Greek ferry operator Anek Lines, had been found to be “seaworthy” when the vessel underwent control checks on 19 December.

Mr. Varvitsiotis added that Athens has proposed towing the vessel to Albanian shores.