Greek Goldair Group of Companies announced that it has inked a deal with Austrian railroads company Rail Cargo Logistics Austria for the creation of a joint enterprise providing freight services by train.

Under the name “Rail Cargo Logistics – Goldair”, the new company is set to invest six million euros in the coming year for its development in rail freight, creating a distribution network among the North Sea, Black Sea and Mediterranean countries.

The announcement on Wednesday came as part of Goldair Group of Companies’ latest progress report. 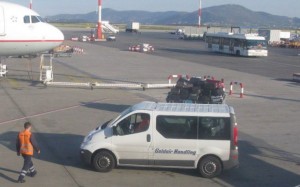 In the meantime, Goldair Handling, a leading supplier of ground handling services in Southeast Europe, increased its market share for a fourth consecutive year at Athens International Airport to 70 percent for 2014, serving an increased by 36 percent number of flights and boosting its turnover by 15 percent. The company invested two million euros in equipment, a portion of which will cover the needs of passengers with disabilities at regional airports.

In 2014, Goldair Handling expanded its activities to Addis Ababa airport in Ethiopia, thanks to a six-year agreement with ICAS for consultancy services as well as commercial and operational management.

Goldair Handling also participated in an international consortium with the aim to provide ground-handling services at three airports in Saudi Arabia, in cities Jeddah, Riyadh and Dammam.

In the meantime, Goldair Cargo also posted a 13 percent increase in cargo transfer and a 5 percent rise in turnover.

Furthermore, the company expressed interest in the development of a freight center at the Thriassio Complex, expected to make Greece a leading transit hub for Southeast Europe.

Six Senses Spa to Open on Mykonos in 2015