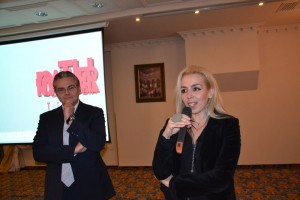 The new travel package that aims to simultaneously boost the conference and cultural side of Thessaloniki is an initiative of Yiannis Aslanis, manager of the Mediterranean Palace hotel and Kiriaki Oudatsi, director of the Olympic Museum.

Thessaloniki’s Olympic Museum and Mediterranean Palace Hotel have embarked on an initiative that aims to simultaneously boost the conference and cultural side of the Greek northern city to a global audience.

The city’s tourism professionals and conference organizers and representatives of the municipality were informed of the launch of a new travel package for conference tourism during a presentation on Tuesday 16 December.

The new travel package includes the fully equipped premises of the Olympic Museum for the organization of a conference with accommodation at the Mediterranean Palace Hotel.

The new product aims to introduce the tourist side of Thessaloniki. Among other things, the travel package offers the opportunity for conference delegates to discover the main sites of the city while simply following the route from the hotel to the museum where the conference they are attending is being held. 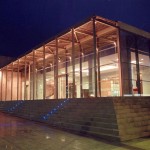 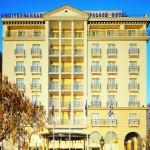 The ultimate aim of the initiative is for conference delegates to depart from Thessaloniki with a complete picture of the historical and multicultural side of the city.

The Thessaloniki Olympic Museum, a member of the Olympic Museums Network, offers two well-equipped rooms ideal for seminars and conferences and an auditorium with capacity for 300 people. The museum itself can enrich the agenda of an event/conference as guided tours to permanent exhibitions can be arranged as well as a variety of cultural activities for conference delegates.

The Mediterranean Palace Hotel is a five-star hotel and caters to guests with high expectations. Located in the heart of the commercial and business center of the city, in close distance to the renowned area named Ladadika, it offers a magnificent view of the Thermaikos Bay.