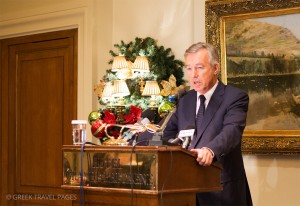 Tourism will be hit hard if the political uncertainty continues in Greece, according to the Greek Tourism Confederation (SETE).

While making a statement today to the media, following an emergency board meeting with the heads of Greek tourism sector associations*, SETE’s president, Andreas Andreadis, referred to the “first signs” of a bad climate for tourism as a result of political developments.

He stressed that Greece’s political developments are affecting the country’s image abroad and underlined that “tourism does not have any partisan color”.

According to Mr. Andreadis, over the past 10 days the rate of bookings to Greece has slowed down and a hesitation has been observed in regards to finalizing agreements for the holding of conferences in the country. He added that the launch of some new announced flights to Athens have also been stalled.

The “smooth management” of political developments is essential

“Our politicians, from each party, are required to understand their very heavy responsibility and live up to their national mission,” a signed announcement by SETE and the heads of Greek tourism sector associations reads.

In the announcement, SETE notes that the “smooth management” of Greece’s political developments is the key for tourism to stay afloat.

“If this situation continues and worsens and is not overturned, tourism and hundreds of thousands of people in every corner of our country that are living or depending on it, will receive a heavy blow that will be difficult to undo. And if tourism collapses, then the last pillar of the Greek economy will collapse as well,” the confederation’s announcement concludes.