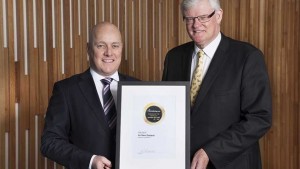 Air New Zealand has been named Airline of the Year for the second consecutive year by AirlineRatings.com, the world’s only safety and product rating website.

“It is fantastic for our airline to be awarded this accolade for the second year running. It is a superb reflection of the efforts of all Air New Zealanders over the past year,” Chief Executive Officer Christopher Luxon said while accepting the award from chief judge Geoffrey Thomas in Auckland.

The judging panel was comprised of some of the world’s most respected and experienced aviation commentators, who also acknowledged Air New Zealand’s commitment to a young technologically advanced fleet and a continual focus on sustainability.

The other airlines in the top ten for 2015 are Etihad, Cathay Pacific, Qantas, Emirates, Singapore Airlines, EVA Air, Lufthansa, All Nippon Airways and British Airways.