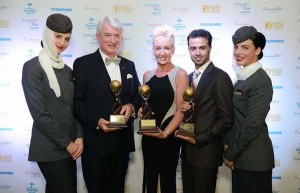 Etihad Airways, the national airline of the United Arab Emirates (UAE), has been awarded the highly coveted title of World’s Leading Airline for the sixth straight year at this year’s World Travel Awards (WTA) in Anguilla.

World Travel Awards was established in 1993 to acknowledge excellence across the tourism industry and is widely recognised as a hallmark of ultimate quality.

The awards are decided through a global vote by more than 500,000 travel professionals and high-end tourism consumers from 171 countries, with the ceremony held this year on the paradise island of Anguilla in the Caribbean.

In 2014 the airline unveiled its new Airbus A380 and Boeing 787 Dreamliner product and service offering, including The Residence by Etihad, the world’s first three-room suite.

This was followed by the unveiling of the Facets of Abu Dhabi aircraft livery design and the airline rolling out its first Airbus A380 in Hamburg, Germany and Boeing 787-9 Dreamliner in Seattle, USA. During 2014, Etihad Airways launched 10 new routes and also signed a transaction implementation agreement to acquire 49 percent shareholding in Alitalia.