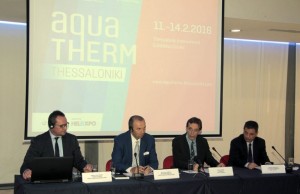 One of the world’s leading events organizers, Reed Exhibitions has given Thessaloniki International Fair (TIF)-HELEXPO and Greece its vote of confidence with the official start of a conferencing collaboration.

As of 2016, TIF-Helexpo will be the host of the annual Aqua-Therm international expo.

“We are bringing an international exhibition product to the city, an expo that is highly recognizable in its field and of great importance,” managing director TIF-Helexpo Kyriakos Pozrikidis told a press conference on Wednesday, 3 December, adding that discussions were underway with Reed for additional events in the region.

The group’s Austrian subsidiary, Reed Exhibitions Messe Wien will jointly organize the Aqua-Therm b2b show in Thessaloniki in 2016. The expo brings together leading manufacturers and suppliers of industrial heating, ventilation and air conditioning. As 2016, the event will be organized annually by TIF-Helexpo for Greece, Romania, FYROM, Albania and Cyprus.

“Thessaloniki is a great location and the period is ideal now that the Greek economy is recovering,” said Reed Exhibitions Messe Wien CEO Matthias Limbeck.

Limbeck said that TIF-Helexpo is an important player in Southeastern Europe, boasting an exhibition center that meets international standards.

“Our strategy is always to enter markets with growth potential,” he added.

Events organizer Reed Exhibitions caters to over 7 million professionals in 43 countries, including the UK, the US, France, Germany, Brazil, Russia, India, China, Australia and the Middle East with some 500 events annually.