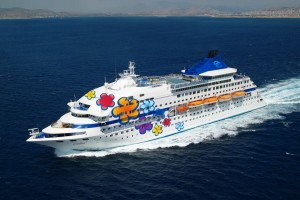 After 12 years, Greek cruise is once again in the international spotlight. On Friday, 28 November, the Louis Cristal set sail from the port of Piraeus for its first transatlantic cruise.

This voyage marks a new era for Greek cruise since the last transatlantic journey made by a ship under Greek flag was in 2002.

During this 24-day journey the Louis Cristal will cross the Mediterranean and the Atlantic to reach the tropical Caribbean Sea. From there and until 30 March, the ship will perform seven-day cruises under the trade name Cuba Cruises.

More specifically, during the voyages, the Louis Cristal will make stops at the ports of Marseille, Tangier, Funchal (Madeira Island), Barbados islands, Santa Lucia and Montego Bay (Jamaica) to enter the ports of Cuba: CienFuegos and Punta Frances. Havana will be the ship’s final destination.

“Greek cruise and Celestyal Cruises, its current sole representative, are proceeding smoothly towards a path of growth,” Kyriakos Anastasiadis, CEO of Louis Cruises, said in reference to this important moment for Greek cruise.

Mr. Anastasiadis said Celestyal Cruises is proud that after 12 years a Greek cruise ship is sailing to Cuba with passengers of all nationalities.

The Louis Cristal will be renamed Celestyal Crystal after returning from Cuba.