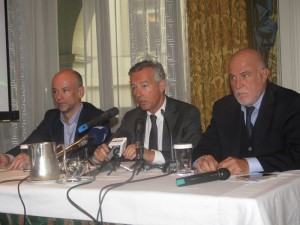 An increase of the Value Added Tax (VAT) rate for hotel accommodation from 6.5 percent to 13 percent would start a domino effect of consequences, according to the Greek Tourism Confederation (SETE). The association said such a move would be “suicidal” for Greek tourism.

SETE called a press conference today, 1 December, in response to reports that the government has proposed to raise the VAT for accommodation in order to conclude negotiations with the troika of Greece’s international lenders-the ECB, the European Commission and the IMF.

Citing data by SETE Intelligence, the association’s president, Andreas Andreadis, informed that if the VAT rate on accommodation rises to 13 percent, the state will in fact collect some 300 million euros of direct revenue but at the same time the country’s GDP will drop at least two percentage points compared to this year’s levels, ie some 3.8 billion euros.

“This reduction will have catastrophic effects to employment, as for every million less tourists that visit our country, we lose 30,000 job positions,” Mr. Andreadis stressed.

If VAT goes up, the demand for Greek travel packages will go down

Mr. Andreadis referred to “vital losses” for tourism, if the VAT on accommodation doubled as it would result to an inevitable increase in the price of the Greek tourism package and make the country an uncompetitive destination.

“Hoteliers will be forced to renegotiate already signed contracts and agreed travel packages for 2015 with foreign tour operators… The flow of millions of tourists will be pushed to our competitors,” he said.

According to Mr. Andreadis, an increase in VAT for Greek hotels will mainly have an impact on SMEs, enterprises that are not located in popular Greek destinations and accommodation units that depend on domestic tourism.

During the press conference, SETE updated its 2014 international arrival forecast and referred to an “absolute record”. The association had expected tourist numbers to hit the 20.5 million mark this year (not including cruise passenger arrivals), but now revised this upwards to 21.5-21.8 million arrivals.

The Hellenic Chamber of Hotels has requested for the government to not increase the VAT on accommodation services.  In a letter to Prime Minister Antonis Samaras, the chamber emphasized that the government should take strategic measures to protect the sector and ensure sustainable development, rather than take the wrong actions and condemn Greek tourism.

Announcements condemning the possible increase of the VAT for Greek hotels have also been released by the General Panhellenic Federation of Tourism Enterprises (GEPOET), the Hellenic Association of Airline Representatives (SAAE) and the Peloponnese Tourism Organization.