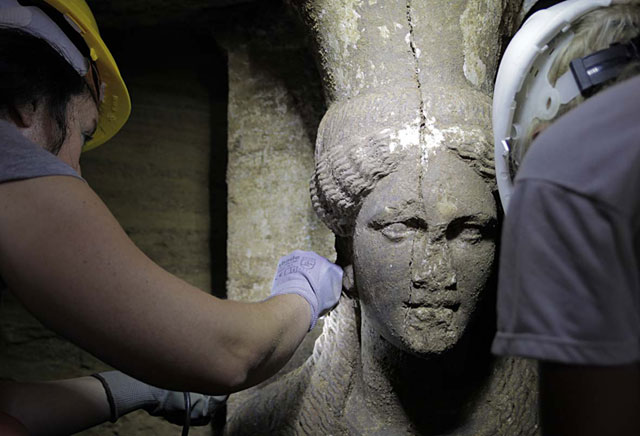 Progress made on the excavations at Amphipolis and particularly at the Kasta Hill site — the first official announcement on this tomb since August 10 — was presented at a press conference on Saturday, 29 November, at the Greek Culture Ministry.

In the presence of Culture and Sports minister Kostas Tasoulas, chief archaeologist Katerina Peristeri said on Saturday that excavation works at Kasta had revealed signs of an ancient crane which was likely used to help transport parts of the grave, showing photos of the dig in progress.

“We started [excavations] in 2012 on this mystery hill on a local rumor that at the Kasta mound there was the ‘Tomb of the Queen’,” Ms. Peristeri said, and added that it was “definitely destroyed and desecrated as it was a monument open to visitors”. 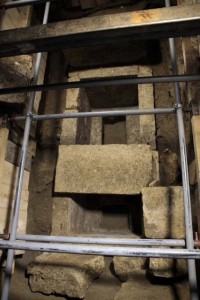 The archaeologist also said the team had unearthed black-glazed pottery dating back to the 4th century BC as well as coins depicting Alexander the 3rd dating to the 2nd century BC.

As to the identity of the person buried there, Ms. Peristeri said the skeletal remains were excavated under difficult circumstances and were transferred with great care so as to undergo lab tests. She added that anthropologists would announce the sex and age of the person buried there at a later date. This, however, sparked the reaction of journalists who claimed that she had initially said, according to Kathimerini daily, it was the grave of a high-ranking Macedonian official.

Ms. Peristeri responded that the culture ministry is expected to make relevant announcements in the coming week.