Greece Goes Global as a MICE Destination, Attracts Spotlight at EIBTM in Barcelona

In the latest efforts to promote the strong potential of MICE tourism in Greece, the Thessaloniki Convention Bureau (TCB) and the Hellenic Association of Professional Congress Organizers (HAPCO) participated at the Greek stand at this year’s European Incentive, Business Travel & Meetings Exhibition (EIBTM) in Barcelona on 18-20 November.

The ibtm (formerly known as EIBTM), which goes global as of next year, is one of the leading MICE tourism events in the world. This year’s three-day expo brought together a record 15,500 industry professionals to network, develop their business and expand their knowledge, marking an 8% increase of participations compared to 2013.

In its first months of operation, the TCB has laid the groundwork for the representation of the northern port city in the international market and its promotion as a prime MICE destination. Its participation in this year’s ibtm is a step in that direction, placing Thessaloniki on the international MICE market while opening channels of communication for future collaborations. 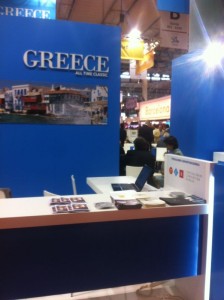 Promoting congress tourism and Greece as a MICE destination since 1996, HAPCO announced that it was in discussions with the Greek National Tourism Organization (GNTO) to improve the country’s competitive edge on the market, particularly at a time of increasing trust in the tourist product.

According the annual Industry Trends Watch Report carried out by Rob Davidson on behalf of ΕΙΒΤΜ 2014, figures reveal increased confidence in the market demonstrated by the rise in the number of company conferences held in 2014.

In a related report, the American Express Meetings & Events 2015 Global Forecast, presented during the EIBTM Leadership Summit which was attended by over 200 industry decision-makers on the eve of the conference, participation from Europe is expected to increase.

The ibtm world 2015 conference is scheduled to take place on 17-19 November.

Greek Holiday Cheer at the Christmas Factory in Central Athens