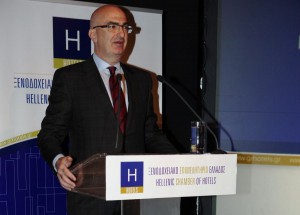 In efforts to explore the sharing economy and its effects on Greek tourism as well as identify possible solutions to lost revenue resulting from illegal leasing practices, the Hellenic Chamber of Hotels organized a forum on Tuesday, 25 November, to present a report on the phenomenon.

Held at the Foundation of the Hellenic World, the forum titled “Sharing Economy in the Greek Hospitality & Tourism Sector” was attended by tourism sector professionals and authorities.

Hellenic Chamber of Hotels president Yiorgos Tsakiris said the aim of the forum was to understand and record international trends in the hospitality sector and to plan an adjustment strategy while securing a safe and fair competitive environment.

“We understand the conditions created due to the economic crisis combined with the possibilities available through Internet applications and cell phones, mark the beginning of new trends with regard to supply and demand of the tourist product,” Mr. Tsakiris said of the sharing economy.

“It is obvious therefore that we cannot remain indifferent to the fact that a potentially uncontrolled increase of such practices may compromise the viability and operation of thousands of businesses.” 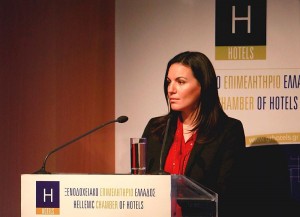 Tourism minister Olga Kefalogianni, who opened the event, stressed the need for Greek tourism to adapt quickly to international developments and underlined the need for fair play.

“We follow the trend when it benefits the sector as a whole. We ensure a just environment, enforce the law and intervene in order to defend the public’s best interest,” she said.

Studies reveal that some 80,000 properties on popular Greek islands were booked via Internet sites as part of the latest sharing economy trend.

In the meantime, according to reports, lost revenue for the Greek economy from illegally operating accommodation facilities amounted to an estimated 1 billion euros.

“This is why we went ahead and commissioned the study,” Mr. Tsakiris said, and added that the sharing economy is not affecting Greece alone but reflects changes in the sector worldwide.

The report comes in the run-up to a study titled “The Effects of the Sharing Economy on Greece’s Tourism and Hospitality sector” carried out by marketing agency Toposophy and commissioned by the Hellenic Chamber of Hotels. Toposophy CEO Manolis Psarros will be supervising the study.

According to Toposophy consultant April Rinne, revenue from the sharing economy across sectors worldwide amounted to $3.5 billion in 2013.