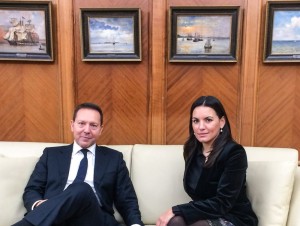 Greek tourism’s progress, prospects and contribution to the Gross Domestic Product (GDP) were the focus of a meeting today, 24 November, in Athens between Greek Tourism Minister Olga Kefalogianni and Bank of Greece governor Yiannis Stournaras.

“Tourism is perhaps the most dynamic sector of the Greek economy today, as it represents some 18-20 percent of Greek GDP and around 20 percent of job positions,” Mrs. Kefalogianni stated after the meeting.

She added that tourism is named among Greece’s three or four national key areas for the recovery of the Greek economy, according to studies released by the Bank of Greece and the Foundation for Economic and Industrial Research (IOBE).

Mrs. Kefalogianni added that the goal of the new tourism season is to achieve even higher performance, further support the Greek economy and attract new investments.

“We can go even higher,” she underlined.