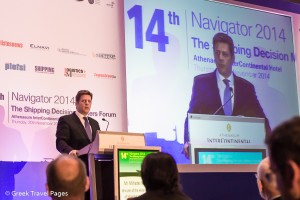 Competitiveness, fair fiscal policy and attracting foreign investment were the key points Shipping and Maritime Minister Miltiadis Varvitsiotis made during the opening on Thursday of the 14th “Navigator 2014 – The Shipping Decision Makers Forum“.

The shipping minister underlined the importance of the sector in the Greek economy and the need for a fiscal framework that will ensure the sector’s sustainable development and draw in foreign investment.

“Based on Bank of Greece data, in the first six months, cash inflow from shipping activities reached 7.45 billion euros compared to 5.82 billion euros in the corresponding period last year, recording a 28 percent increase on an annual basis,” he said.

The minister also referred to the improved profile of the Greek shipping register, with 50 percent of the fleet under 10 years of age compared to 12.7 years, which is the average for the international fleet. According to Mr. Varvitsiotis, compared to the same period last year, the Greek shipping register has recorded a net increase in its total capacity. He added that the majority of new registrations involve high valued young ships, including new liquefied natural gas (LNG) carriers and VLCC tankers.

“We want our ports to attract investment and operate as international trade hubs. We are achieving this at the Piraeus port, working hard to materialize Cosco’s 230-million-euro investment, which is expected to heighten the Piraeus’ role as an international hub and leading port in the Mediterranean,” he said.

Mr. Varvitsiotis also stressed the need to develop coastal and marine tourism with particular emphasis on yachting and cruise travel. In this direction the ministry has taken action with legal initiatives for the inclusion of new ports of call for cruises as well as the extension of the tourism period.