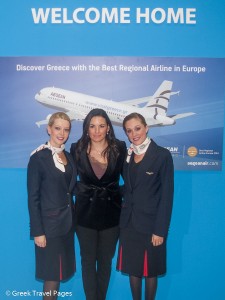 Greek Tourism Minister Olga Kefalogianni at the stand of Aegean Airlines at the recent World Travel Market in London.

Tourism Minister Olga Kefalogianni underlined the crucial role of the transport sector in the development of the tourism industry and invited all industry players to invest and contribute to the “national affair” of ensuring that the Greek tourist product is known for its quality, efficiency and functionality.

Speaking at the presentation of Aegean Airline’s new flight schedule on 18 November in Heraklion, Crete, Mrs. Kefalogianni said that tourist development can only be achieved when basic infrastructure is in place and high quality transport services available.

“We are implementing a new national strategy in tourism and its future. We invite all those who wish to play a decisive role in the advancement of the industry to join our plan, embrace our efforts, become one with our vision and contribute to this national affair called Greek tourism. It is in our best interests to see Greek businesses like Aegean gain momentum,” Mrs. Kefalogianni said.

The minister commended Aegean on its progress, its leading position on the market and overall contribution to the promotion of Greek tourism, stressing that the transport sector plays a key role in the development of tourism, facilitating visitors’ movement and ultimately shaping a country’s image abroad.

“Air transport plays a diverse role in tourism as it contributes not only to the movement of visitors but also ensures the international presence of our country. It is a visual image of the country,” Mrs. Kefalogianni said.

“The presence of airlines at airports and tourist offices across the globe is in itself a powerful advertising tool with a far-reaching message.”

Greek carrier Aegean announced flights to 134 destinations as of next year.