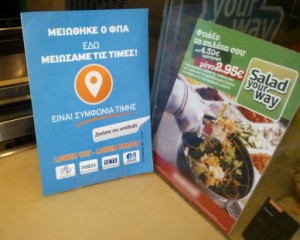 The reduction of the VAT rates on accommodation and food services in Greece were key factors for the increase of the Greek tourism product’s competitiveness over the last years, according to the Greek Tourism Confederation (SETE), the country’s main tourism body.

SETE has expressed concern in regards to the possibility of a VAT hike as a prerequisite to conclude negotiations between the state and the troika of Greece’s international lenders-the ECB, the European Commission and the IMF.

In a statement released today, 18 November, SETE said that in 2014, Greece saw positive growth for the first time following a six-year recession due to the VAT reductions while 115,000 new jobs were created.

“Bringing back the VAT of the exported tourist package at levels equal to France, Italy, Spain, Portugal and Turkey, and along with other actions, Greece has managed to more than triple the rise of tourist arrivals and revenues in the last two years compared to its competitors,” the confederation said.

SETE said that all indications show that this increase will most likely continue in 2015.

“SETE believes that the Government and all political forces will not accept any change in existing VAT rates,” the confederation concluded.