Tax Breaks Proposal as Incentive for Film Productions in Greece 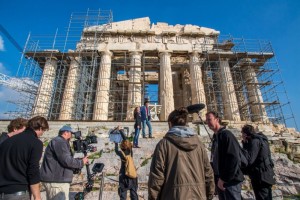 Deputy Culture and Sports minister Angela Gerekou presented George Mavragiannis, her counterpart at the finance ministry, with a proposal for tax incentives to attract film production to Greece.

The proposal, which foresees a 100 percent tax deduction on the total sum invested in the production of a film in Greece, was submitted to the troika for approval and the finance ministry is expected to present a draft in the coming days, according to an announcement by the Culture and Sports Ministry.

“We have submitted this essential and consistent with those of other countries tax incentives framework. Its implementation, in conjunction with the simplification of licensing procedures, can dynamically put our country on the map of attractive film destinations,” said Mrs. Gerekou.

If enforced, the tax break will involve a tax base reduction as a portion of pre-tax profits invested will not be included in taxable income as well as a financial gain equal to the income tax on the amount invested.

Travel and Transport Task Force on Ebola Virus Says “No” To General Bans on Travel, Trade