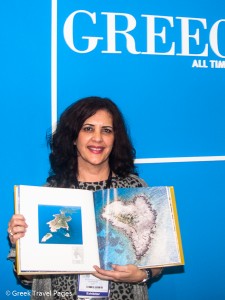 WTM 2014: Region of Peloponnese vice governor for development works, Konstantina Nikolakou, shows the heart-shaped island near Sapientza in the Messinian Gulf. “Can you think of a better wedding destination than this?” she asked.

The relaunch of the railroad network in the mountainous Peloponnese and the promotion of the region as a wedding destination are included in the tourism strategy of the Region of the Peloponnese.

Speaking to GTP during the World Travel Market in London, the region’s vice governor for development works, Konstantina Nikolakou, said that the region aims in the coming period to re-operate stations of the Peloponnese rail network – that currently stand dormant – to offer visitors a full experience.

The Peloponnese rail network dates to the 19th century and apart from the meter gauge railroads it includes 153 stations.

According to Ms. Nikolakou, the region has already discussed the issue with the Ministry of Transport and TRAINOSE (Hellenic Railways Organisation). The region’s plans include the upgrade of the stations, 79 of which have been listed as monuments of Greek railway architecture.

Ms. Nikolakou also said that the region could be a viable destination for weddings as well as honeymoon tourism, pointing out that spots such as Monemvasia and the heart-shaped island near Sapientza in the Messinian Gulf, southwestern end of the Peloponnese, could be promoted for this purpose. 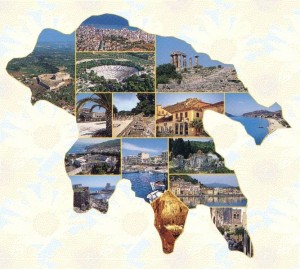 “The Peloponnese has myths. This is where Paris abducted the beautiful Helen of Troy. This is where Artemis, the great Olympian goddess of hunting, walked… The Greek islands may be wedding destinations because they have their own beauty but the Peloponnese has the advantages of a region that has the sea on the one side and an excellent history on the other,” she said.

During WTM, representatives of the region held discussions with British travel agents that market wedding packages. According to Ms. Nikolakou, they showed a great interest in the Peloponnese.

“Our Bourtzi in Nafplio or the most unique castle town in the world in Monemvasia, can not be compared with any other destination in regards to holding wedding ceremonies,” the region’s vice governor added. 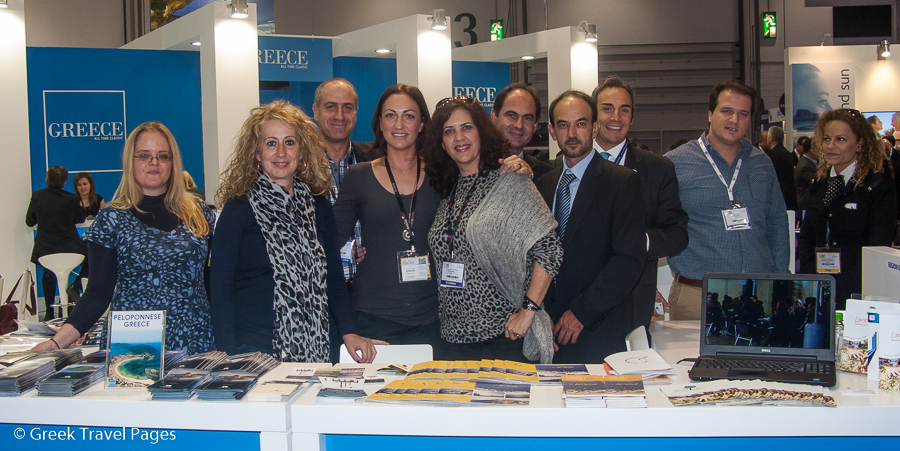 The stand of the Region of the Peloponnese at the World Travel Market 2014 in London.

Low-cost hub in the works

The Region of the Peloponnese also has plans to upgrade the Kalamata Airport in Messinia due to the rising number of passengers visiting the destination. 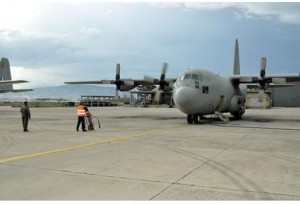 Meanwhile, the transformation of the military airfield in Tripoli into a facility to service passenger and trade traffic is expected to contribute more tourism and commerce to the region. The aim of the region is for the Tripoli Airport to become a top low-cost hub of the Mediterranean in the next two years.

The Region of the Peloponnese is also promoting works to facilitate accessibility to the region via the sea. These works include interventions to the port of Gythio that are almost complete. Works are also progressing at the marina in Nafplio via PPP (Private Public Partnerships) and interventions at the marina of Monemvasia will follow next.

Earlier this year, it was announced that Messinia of the Region of the Peloponnese, will host the 2015 Travel Convention of the Association of British Travel Agents (ABTA) at Costa Navarino from 12-14 October.