“2014 is a landmark year for Greek tourism but not only because international tourism arrivals and tourism receipts achieved a record high, but also because of the significant institutional reforms that have taken place,” Greek Tourism Minister Olga Kefalogianni said while inaugurating the Greek stand at the World Travel Market (WTM) at ExCeL, London exhibition center, on Monday 3 November.

The Greek tourism minister said that taking into consideration the positive messages from London this year, 2015 is expected to be an equally positive and effective year for tourism. 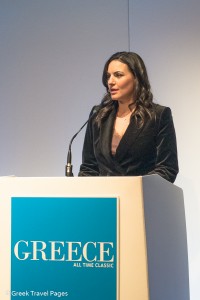 Following the inauguration of the Greek stand, Mrs. Kefalogianni presented the new communication strategy to attract more visitors to Greece.

“Our new communication strategy is based on the Greek gods and ancient heroes that we have all read since our childhood and have all known since our school years… They take us around Greece and explain the uniqueness of the country with all its warm hospitality,” she said.

Explaining the new strategy, the tourism minister said that Greece, a strong and internationally known brand, is enriching its communication with its core, timeless components.

“This year we are keeping all of the core features and we narrate a story… Our aim is to promote the true values of life, the myths, which convey moral lessons from the ancient times up to the present,” Mrs. Kefalogianni said.

“Every Greek destination is the birthplace of an ancient god, every place in our country hides a myth, a magical story, the energy of which is kept alive until today,” she said. 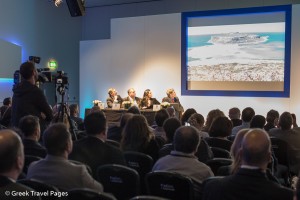 According to the tourism minister, well known contemporary activities such as harvesting, entertainment, sports, learning and arts are inspired and correspond to a Greek god, a Greek hero, a myth or a historical event.

“We have gathered all this material and we present it to the world through our communication channels,” Mrs. Kefalogianni said.

“Every corner of our country has its own great history, every element of Greek nature corresponds to a philosophical approach, which has been incorporated into the global wisdom… The sea, the mountains, the plains, the Greek villages and the islands all have a story to tell and a lesson to offer to every visitor,” she concluded.

Following is a film, produced by the GNTO, which visualizes Greece’s communication strategy for 2015.