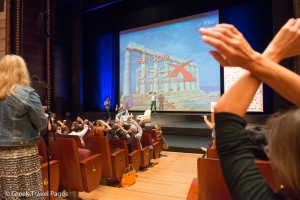 TBEX Europe 2014 – the Travel Blog Exchange European Conference – that took place in Athens, Greece, exceeded all expectations as references to the country’s capital city reached some 11.7 million twitter users, according to the Athens Convention and Visitors Bureau (ACVB).

Athens now has every reason to anticipate a major boost to its profile as a tourism destination following its role as host city to TBEX, the largest and most popular annual meeting of the international community of travel bloggers, writers, new media content creators, and social media savvy travel industry professionals.

This year’s TBEX conference took place 23-25 October and attracted some 850 attendees to Athens.

However, the buzz on social media began even before the event. During 20-27 October, messages (tweets) regarding Athens reached more than 11.7 million unique users and received more than 68,086,915 impressions through 14,500 mentions from over 3,400 different users on twitter only via the official hashtags #TBEXATHENS and #THISISATHENS.

The TBEX attendees came from 53 countries from all regions of the world, with the majority of them from North America (32 percent), Europe (38 percent) and Asia (11 percent). 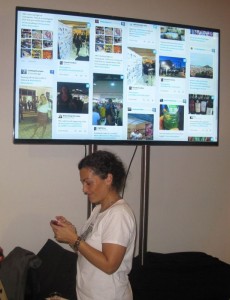 A travel blogger tweets about Athens during the TBEX opening party at Technopolis. All tweets were displayed on screen in real-time.

“The message that Athens is a modern, safe and multidimensional tourism destination, with unique cultural, historical and natural features, is circulating internationally in an exceptional manner,” ACVB said in an announcement.

After TBEX wrapped up in the Greek capital, 70 tours and familiarization trips in Athens-Attica took place, along with another six fam trips to other parts of Greece (Epirus, Meteora, Cyclades, Thessaloniki, Magnisia, Peloponnese).

According to ACVB, since the beginning of last week, even before the event kicked off, and until today, there have already been thousands of posts and features on Athens and Greece through all renowned international social and professional media networks (twitter, facebook, instagram, pinterest etc.) and blogs that collectively have yielded millions of impressions and readings.

Over 350 types of content (tweets, posts, instagram photos, interactions, etc.) were recorded on the social media profile of the Municipality of Athens.

The event, which was secured for Athens by the municipality and ACVB, was supported by over 65 organizations and businesses.

Greek Travel Pages via GTP Headlines was an official media partner of the TBEX Athens event.