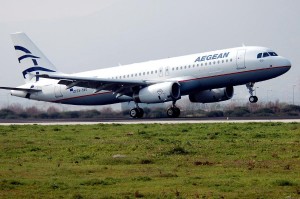 Aegean Airlines recently reinstated its direct flights from Athens to Cairo, three years after their disruption.

The winter schedule began on 26 October and will run until 28 March 2015. Aegean Airlines will operate from Athens to Cairo three times per week, with 168 seat Airbus A320 aircraft.

Flights depart from Athens every Wednesday, Friday and Sunday at 23:45 and arrive in Cairo at 01:45. Return flights will depart from the capital of Egypt every Monday, Thursday and Saturday at 04:45, arriving in Athens at 06:45.

According to an announcement, Aegean Airlines has added nine extra flights to its international network for the winter schedule 2014-2015, compared to the winter season 2013, aiming to contribute in the growth of tourism and the extension of the tourism season.

Iberia To Fly Direct From Athens To Madrid In Winter 2014