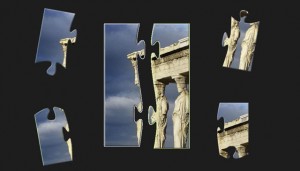 Athens International Airport (AIA) will launch a new application that will give visitors of the city the chance to express their opinion, in an interactive way, on the Parthenon Marbles dispute between Greece and Britain.

From 19 November, a new app will be available on special screens throughout the airport allowing Greek and foreign passengers/visitors to “piece together” the West Metope of the Parthenon frieze and also “install” the sixth (missing) Caryatid figure in her place of origin.

According to an announcement by AIA, the new app is part of a series of actions for the promotion of the Greek capital to passengers and visitors.

During the first nine months of 2014, foreign visitors to Athens grew by 28 percent and a 23 percent increase was recorded in the number of passengers who choose the Greek capital as a city break destination compared to 2013.

“This demonstrates the dynamic recovery of our city as a tourism destination,” AIA said.